I’m haunted by the face of an old boyfriend. I learned recently that he died. My sister heard through our hometown grapevine. My boyfriend was one of four brothers. My sister knew one and one of our girlfriends married another. In fact, that’s how my boyfriend and I met – walking down the aisle, bridesmaid and groomsman.

It was the summer before we both went off to different colleges. Only 100 miles apart, but far enough so that we only saw each other occasionally and dated others. I remember him as being kind and gentle and being there for me when my father had a heart attack at Christmas and recovered. He was also good-looking. 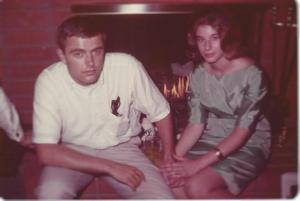 Toward the end of the school year, he got more serious. But by then I had met the man I would marry. And he – unknown to him for eight and a half months – had gotten a woman pregnant. So we married others. We both had two sons. And lost touch.

I think I remember hearing that he eventually divorced, as did I. To be truthful, I didn’t think of him often. I had good memories of him, but he didn’t feel like the one who got away. It seems unbelievable now, looking back, that our paths never crossed again. He worked for Northrup as an engineer and I worked nearby for Xerox as a technical writer. We knew many of the same people and were circulating in our small community’s singles world – at least until a few years ago when I moved 100 miles south again.

So why does he haunt me now? Because his face came into my life again. He lives beyond death, thanks to the séance stalking of the Internet. I found his obituary and a video posted by his family. He was not old. Apparently had diabetes. He leaves behind two sons, three brothers, and a sister. No mention of wife or girlfriend. I didn’t recognize him at first in his online picture. He had gone bald and his once strong eyebrows were pale and his face puffy. But the video (In Loving Memory Of … ocean scenes, music, What a Wonderful Life, My Way …) included photos of him from birth to almost death. There he was as a cute little boy, a hunky surfer throwing back beers with buddies, in his brother’s wedding party, with his new bride, and then with his sons. His sons looked a lot like mine – blond mops of hair. Sailboats in the background. Near where I used to sail with my father.

Then the slightly heavier middle-aged engineer with thick glasses, an older son with hair gone darker as one of my son’s did. His brothers growing beards and paunches. A daughter-in-law and grandson. An attractive woman in a baseball cap – his sister?

At the end of the video, I was in tears, but his face now seemed familiar. It also seemed sad. Was he sad, or ill, or both? Was he surprised at how his life turned out? I wanted to reach back somehow and offer comfort. Should I have tried to find him 20 years ago? Would we have liked each other? If we had married a long time ago when we met, when our lives were still ahead of us, would we have been happy? Would we have had similar sons?

So, he haunts me – the fact that I’ll never know the answers and that the door is closed forever. Maybe he was the one who got away.