I recently started a trousseau. No, I am not about to take a bridal leap with my possessions. But I’d like to fly into a new perch and so I’m preparing.

I don’t love my current home and want to move within the next year. In order to not feel stuck and to find a home that is right for me, it helps me to visualize it. I imagine and focus on location, layout, light. I see the entrance and the rooms – and I furnish them too. 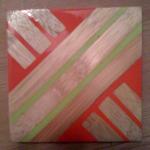 Without realizing it, I already have some of that look and it wouldn’t take much to zap it up. My grandmother, who was ahead of her time, left me a Danish modern teak sideboard and some small tables and my mother some

Metlox pottery pieces, which were made in our hometown of Manhattan Beach and where I worked while going to college.

Now when I’m out browsing, I keep my eyes open for these nostalgic pieces – old but ready for a new home, or new but with a decades-old design. For ideas, I’m visiting San Diego stores like The Atomic Bazaar and Boomerang for Modern. So far, I’ve purchased a set of coasters.

This is what I mean by a trousseau. Possessions for a new home. Visualizing and decorating. My hope chest. A symbol of meeting challenges and changes while still appreciating what I have and where I am.

As a bride, I didn’t have a hope chest. The idea for one occurred to me many years later, when I found myself in an unhappy relationship. I had moved in with a man too quickly and by the time I realized I’d made a mistake, I was stuck, at least for awhile until I could save money to leave. I began to visualize where I wanted to live. One day while out looking for something else, I fell in love with a kettle – bright iridescent red, green and yellow with a wood handle and space-age shape. I bought it and brought it home and tucked it away, gradually adding towels, spatulas, salt and pepper shakers in all the bright colors I imagined my new kitchen would radiate. (My boyfriend preferred black.)

It may seem like a silly thing, but gazing at that non-black kettle got me through some dark days until I moved it into my new home filled with light and ocean air and put the kettle on for a cup of tea.

2 thoughts on “My Hope Chest”

Funny Blogs With A Hint Of Personal Development